Lin-Hua Wu 巫麟化 typifies the finest in the Lingnan School of Chinese painting that came to prominence in China in the early 1900s. It is a style that combines traditional Chinese painting with elements of Western and Japanese realist painting. Begun in Canton, it spread throughout China and later Taiwan.

Wu was born in 1937 and grew up in Yunting, in Fukien Province in the southern part of China near Hong Kong. In 1947 he and his family escaped communist domination by fleeing to Taiwan. At age 13 Wu first observed a group students painting with water colors and oil paints in a distinctive Western style and became fascinated. With the help of an art teacher, he quickly discovered that he had talent. His fascination with painting grew

After graduating from school in 1960, Wu began to shift from Western-style painting to traditional Chinese painting. By 1962 he had saved some money and began a five year period of studying under Chao Sung-Chuan, a fine painter and an excellent teacher. Chao taught Wu the art of painting flowers and birds. In 1964 Wu began a three year period of studying under Huan Chun-Pi 黃君璧, an artist famous throughout Taiwan for his beautiful landscapes. In 1965 he expanded his training by joining Au Ho-Nien 歐豪年, the best known artist of his day in the Lingnan style. With Au Ho-Nien, Wu perfected his painting of landscapes, flowers, birds, and fish.

Wu learned his craft well and in 1966 was selected to participate in the 8th National Art Exhibition. This was the first of many exhibitions that showed his work over the next 24 years.

Wu became a professional painter in1961 when he joined China Pottery Arts and began painting pottery and water color landscapes in the Lingnan style. He worked there continuously until 1981 when he visited the US to learn American sign language . He also put on an art show in Los Angeles where his work was well received. He returned to Taiwan in 1982 and rejoined China Pottery Arts where he continued to work until 1990 when he emigrated to the United States.

Since coming to the United States Wu has continued to expand his repertoire and has put together a strong portfolio of original designs. He now lives near Seattle, Washington with his wife of 46 years. With his own studio he now concentrates on landscape and floral compositions. 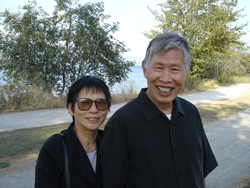 The artists at China Pottery Arts. Lin Hua Wu is second from the right in the back row. (1968) 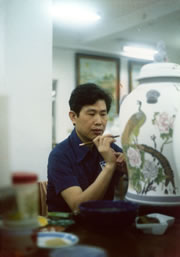 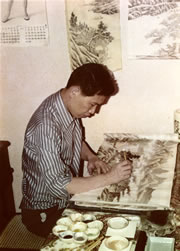 Lin Hua had nearly perfected his style of painting landscapes and flowers. (1971) 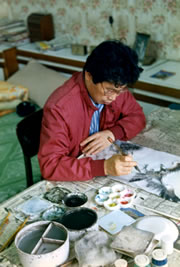 This large landscape was the coordinated effort of four artists, including Lin Hua Wu. (1977)